Prometheus is a system monitoring and alerting system. It was opensourced by SoundCloud in 2012 and is the second project both to join and to graduate within Cloud Native Computing Foundation after Kubernetes. Prometheus stores all metrics data as time series, i.e metrics information is stored along with the timestamp at which it was recorded, optional key-value pairs called as labels can also be stored along with metrics.

What are metrics and why is it important?

Metrics in layperson terms is a standard for measurement. What we want to measure depends from application to application. For a web server it can be request times, for a database it can be CPU usage or number of active connections etc.

The basic components of a Prometheus setup are:

(Note: Apart from this Prometheus has push_gateway which is not covered here).

Let's consider a web server as an example application and we want to extract a certain metric like the number of API calls processed by the web server. So we add certain instrumentation code using the Prometheus client library and expose the metrics information. Now that our web server exposes its metrics we can configure Prometheus to scrape it. Now Prometheus is configured to fetch the metrics from the web server which is listening on xyz IP address port 7500 at a specific time interval, say, every minute.

At 11:00:00 when I make the server public for consumption, the application calculates the request count and exposes it, Prometheus simultaneously scrapes the count metric and stores the value as 0.

By 11:01:00 one request is processed. The instrumentation logic in the server increments the count to 1. When Prometheus scrapes the metric the value of count is 1 now.

By 11:02:00 two more requests are processed and the request count is 1+2 = 3 now. Similarly metrics are scraped and stored.

The user can control the frequency at which metrics are scraped by Prometheus.

(Note: This table is just a representation for understanding purposes. Prometheus doesn’t store the values in this exact format) 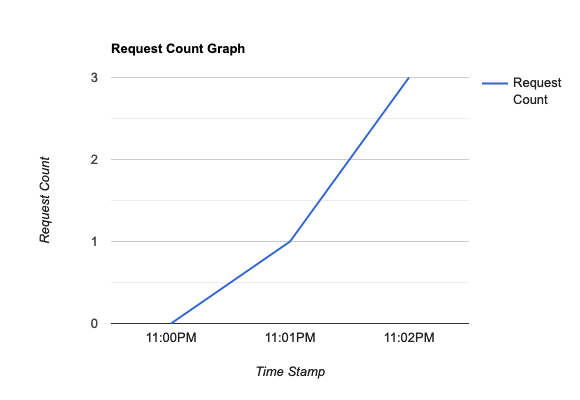 One can scrape multiple useful metrics to understand what is happening in the application and create multiple charts on them. Group the charts into a dashboard and use it to get an overview of the application.

Show me how it is done

Prometheus exposes its own metrics which can be consumed by itself or another Prometheus server.

Now that we have Prometheus installed, the next step is to run it. All that we need is just the binary and a configuration file. Prometheus uses yaml files for configuration.

Now we have Prometheus up and running and scraping its own metrics every 15s. Prometheus has standard exporters available to export metrics. Next we will run a node exporter which is an exporter for machine metrics and scrape the same using Prometheus. (Download node metrics exporter.)

Run the node exporter in a terminal.

Next, add node exporter to the list of scrape_configs:

In this tutorial we discussed what are metrics and why they are important, basic architecture of Prometheus and how to run Prometheus.

This documentation is open-source. Please help improve it by filing issues or pull requests.