Continuing our series of interviews with users of Prometheus, Philippe Panaite and Barthelemy Stevens from L’Atelier Animation talk about how they switched their animation studio from a mix of Nagios, Graphite and InfluxDB to Prometheus.

Can you tell us about yourself and what L’Atelier Animation does?

L’Atelier Animation is a 3D animation studio based in the beautiful city of Montreal Canada. Our first feature film "Ballerina" (also known as "Leap") was released worldwide in 2017, US release is expected later this year.

We’re currently hard at work on an animated TV series and on our second feature film.   Our infrastructure consists of around 300 render blades, 150 workstations and twenty various servers. With the exception of a couple of Macs, everything runs on Linux (CentOS) and not a single Windows machine.

At first we went with a mix of Nagios, Graphite, and InfluxDB. The initial setup was “ok” but nothing special and over complicated (too many moving parts).

When we switched all of our services to CentOS 7, we looked at new monitoring solutions and Prometheus came up for many reasons, but most importantly:

When we finished our first film we had a bit of a downtime so it was a perfect opportunity for our IT department to make big changes. We decided to flush our whole monitoring system as it was not as good as we wanted.

One of the most important part is to monitor networking equipment so we started by configuring snmp_exporter to fetch data from one of our switches. The calls to NetSNMP that the exporter makes are different under CentOS so we had to re-compile some of the binaries, we did encounter small hiccups here and there but with the help of Brian Brazil from Robust Perception, we got everything sorted out quickly. Once we got snmp_exporter working, we were able to easily add new devices and fetch SNMP data. We now have our core network monitored in Grafana (including 13 switches, 10 VLANs).

After that we configured node_exporter as we required analytics on workstations, render blades and servers. In our field, when a CPU is not at 100% it’s a problem, we want to use all the power we can so in the end temperature is more critical. Plus, we need as much uptime as possible so all our stations have email alerts setup via Prometheus’s Alertmanager so we’re aware when anything is down.

Our specific needs require us to monitor custom data from clients, it’s made easy through the use of node_exporter’s textfile collector function. A cronjob outputs specific data from any given tool into a pre-formatted text file in a format readable by Prometheus.

Since all the data is available through the HTTP protocol, we wrote a Python script to fetch data from Prometheus. We store it in a MySQL database accessed via a web application that creates a live floor map. This allows us to know with a simple mouse over which user is seated where with what type of hardware. We also created another page with user’s picture & department information, it helps new employees know who’s their neighbour. The website is still an ongoing project so please don’t judge the look, we’re sysadmins after all not web designers :-) 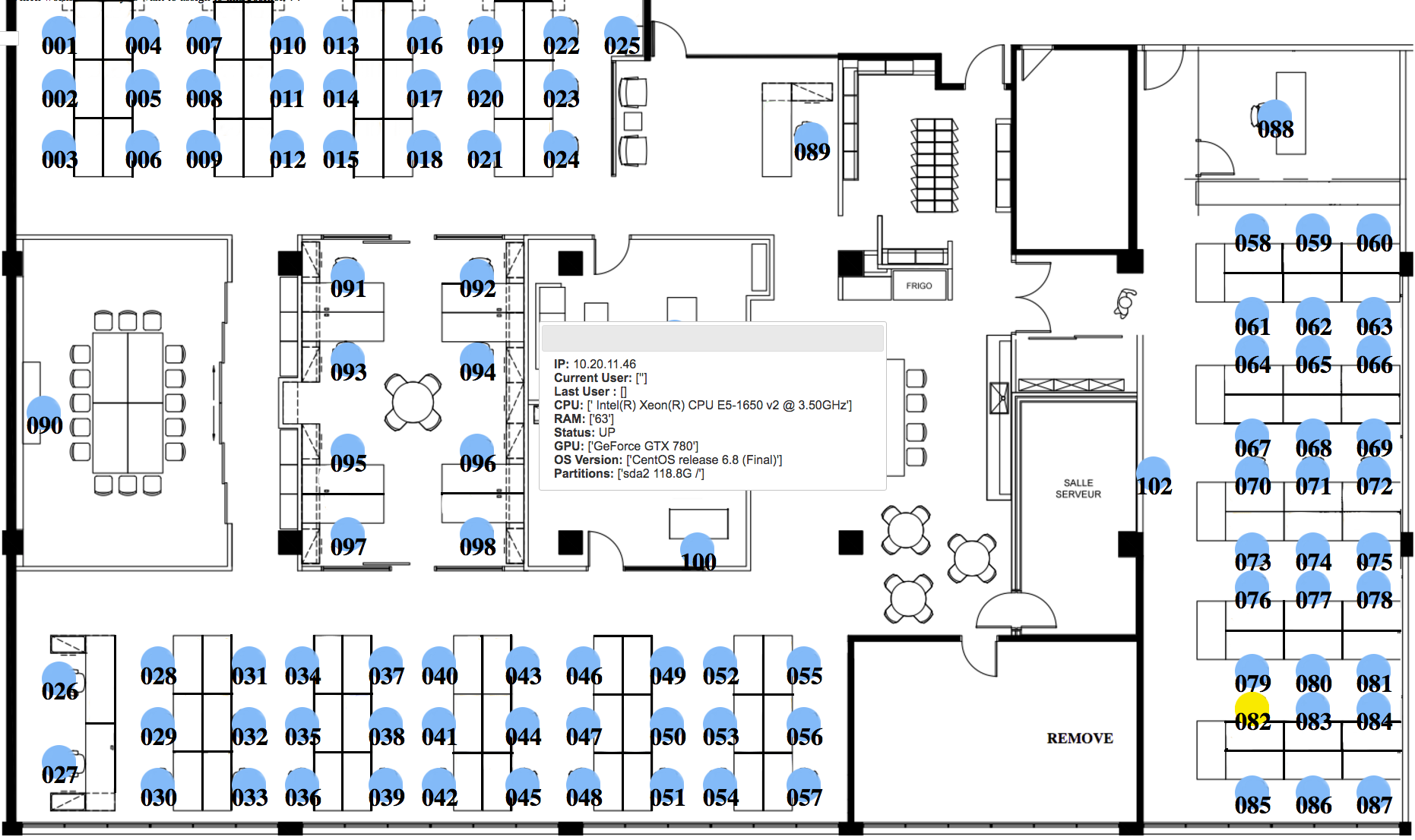 It gave us an opportunity to change the way we monitor everything in the studio and inspired us to create a new custom floor map with all the data which has been initially fetched by Prometheus. The setup is a lot simpler with one service to rule them all.

What do you think the future holds for L’Atelier Animation and Prometheus?

We’re currently in the process of integrating software licenses usage with Prometheus. The information will give artists a good idea of whom is using what and where.

We will continue to customize and add new stuff to Prometheus by user demand and since we work with artists, we know there will be plenty :-) With SNMP and the node_exporter’s custom text file inputs, the possibilities are endless...